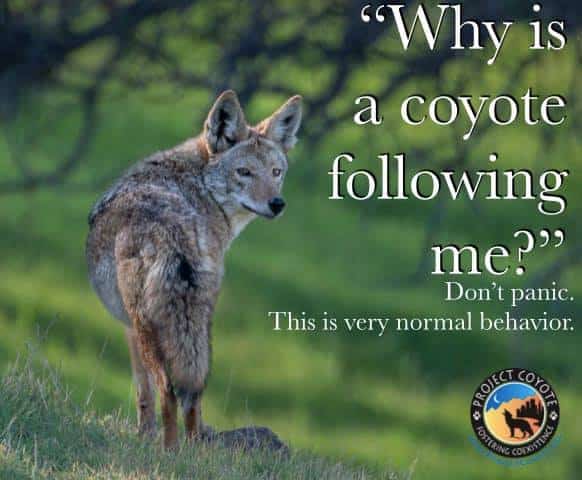 Has a coyote ever “followed” you or your dog while you’re walking in your neighborhood or in the park? If so, you may have felt afraid, perhaps thought the coyote was stalking you, or that an attack was imminent. But don’t fear.

Coyotes are naturally curious animals and often engage in this behavior called “escorting”. Escorting is when a coyote, sometimes with its mate, makes sure that you are leaving its territory. This behavior is most often seen from early March to late April when coyote parents are protecting their precious puppies. Escorting most often happens in the early morning or in the evening, and because they may see dogs as a threat to their babies, it’s most often seen by dog walkers.

What do you do if you’re “escorted” by a coyote? Don’t panic; the coyote is much more terrified of you! If you don’t have your dog leashed – which you should in coyote country- immediately leash it and keep it by your side. Calmly keep walking, slowly, as normally.

Soon enough, you’ll be out of the coyote’s home and he will stop escorting you! On the off chance, the escorting coyote starts to approach too closely, there are some tips below. As we humans develop more and more woodlands, coyote coexistence has become even more essential; we simply must learn to speak their language.

Steps to take if a coyote is close by

As we learn how to coexist with coyotes, we can share our findings with our children — and most importantly, teach them how to safely respond to a coyote encounter. Small shifts in our individual actions and habits can make a difference to our own safety while respecting wildlife.

For a community to successfully coexist with coyotes, it will take a collective effort. Still, we can nudge this conversation forward by raising coyote-safety awareness through discussions with friends and neighbors and others in our communities.