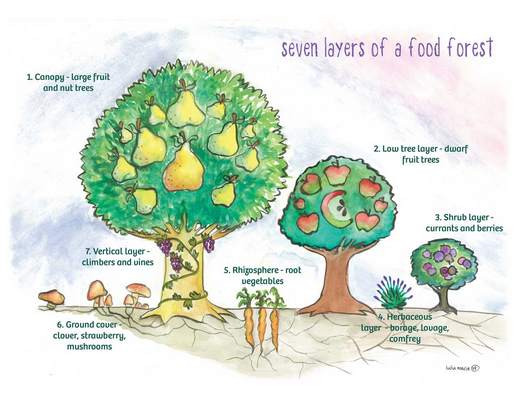 If you’ve ever wandered back roads in a developing, tropical country, you know that many of the locals grow much of their own food. You might also have noticed that their food gardens aren’t comprised entirely of small annual vegetables planted in straight rows like ours are. They are typically wild-looking plantings of edible trees, shrubs, vines, and ground cover all mingling effortlessly together as if Mother Nature had planted the garden according to her own design. These are literally forests of food.

Forest gardening has been the standard for millennia in many tropical regions, but it’s possible in more temperate climes as well. A British chap by the name of Robert Hart first popularized the concept among European and North American gardeners with the publication of his book Forest Gardening: Cultivating an Edible Landscape in the 1980s. Food forests have also figured prominently in the permaculture movement, an approach to designing agricultural systems that mimic natural ecosystems.

Food forests are like the ultimate organic garden. Does a forest need tilling, weeding, fertilizer, or irrigation? Nope. And that’s the goal. Because they’re mostly perennial crops, there’s no need to till. Not tilling preserves the natural soil structure, preventing the loss of topsoil and allowing all the little microbes and soil critters to do their jobs, cycling nutrients and maintaining fertility. The deep roots of trees and shrubs make them much more drought tolerant than annual vegetables, and they shade the smaller plants below, keeping everything lush and moist in a self-maintaining—in other words, a highly sustainable—system.

The first step in establishing a food forest is to choose your plants. The largest plants will reach into the sun, so the most common fruiting trees and shrubs are fair game. The smaller plants generally need to be more shade tolerant, as they will be in the understory. But you can leave sunny patches here and there—like little forest clearings—to accommodate species that need more light (though see Step 3 for a trick to make the most of the available sunlight).

Winter is the ideal time to get started, because most edible trees, shrubs, vines, and herbaceous plants can be purchased and planted while dormant, which is better for the plants—and for your bank account. That’s because at this time of year they are sold in “bare root” form—meaning without soil or a pot—which gives the roots a more natural structure and costs less for nurseries to produce. Bare root plants are typically ordered in January or February, for planting in early March, or as soon as the ground thaws in your area. Naturally, you’ll want to stick with species that are well-adapted to your region.

CANOPY: This layer is primarily for large nut trees that require full sun throughout the day, such as pecans, walnuts, and chestnuts, all of which mature to a height of 50 feet or more.

UNDERSTORY TREES: This layer is for smaller nut trees, like filberts, and the majority of fruit trees. The most shade tolerant fruit trees include native North American species like black mulberry, American persimmon, and pawpaw, though many other fruit trees will produce a respectable crop in partial shade.
Vines: Grapes, kiwis, and passion fruit are the most well-known edible vines, though there are many other more obscure specimens to consider, some of which quite are shade tolerant, such as akebia (edible fruit), chayote (a perennial squash), and groundnuts (perennial root crop). Kolomitka kiwi, a close relative of the fuzzy kiwis found in supermarkets, is among the most shade-tolerant vines.

SHRUBS: A large number of fruiting shrubs thrive in partial shade, including gooseberries, currants, serviceberries, huckleberry, elderberry, Aronia, and honeyberry, along with the “superfoods” seaberry and goji. Blackberry and Blueberry bushes will work well here in the U.S.

HERBACEOUS PLANTS: This category includes not only plants commonly thought of as herbs—rosemary, thyme, oregano, lavender, mint, and sage are a few of the top perennial culinary herbs to consider for your forest garden—but is a catch-all term for all leafy plants that go dormant below ground in winter and re-sprout from their roots in spring. This layer is where perennial vegetables, like artichokes, rhubarb, asparagus, and “tree collards” fit in.

GROUND COVERS: These are perennial plants that spread horizontally to colonize the ground plane. Edible examples include alpine strawberries (a shade-tolerant delicacy), sorrel (a French salad green), nasturtiums (has edible flowers and leaves), and watercress (requires wet soil), all of which tolerate part shade.

RHIZOSPERE: This refers to root crops. It’s a bit misleading to call it a separate layer, since the top portion of a root crop may be a vine, shrub, ground cover, or herb, but it’s Hart’s way of reminding us to consider the food-producing potential of every possible ecological niche. Most common root crops are sun-loving annuals, however, so you’ll have to look to more obscure species, such as the fabled Andean root vegetable oca, ulluco, yacon, and mashua, for shade-tolerant varieties.

Choose an open, sunny location for your forest garden. It can be as small as 100 square feet—a single fruit tree and an assortment of understory plants—or multiple acres. At the larger, commercial-scale end of the spectrum, forest gardening is often referred to as agroforestry. A number of tropical crops, including coffee and chocolate, are grown commercially in this way, though commercial agroforestry is uncommon in North America (other than in the context of timber plantations).

Unlike preparing for a conventional vegetable garden, there is no need to till the earth and form it into beds in preparation for a forest garden. Instead, dig a hole for each individual plant, just as if you were planting ornamental shrubs and trees. However, if the soil quality is poor, you may wish to “top-dress” the entire planting area with several inches of compost prior to planting.

One situation in which raised beds are desirable in a food forest is where drainage is poor. But rather than make the effort to construct conventional raised beds from wood, you may opt to sculpt the earth into low, broad mounds at the location of each tree. Smaller plants may then be positioned along the slopes of the mounds. A variation on this approach is to sculpt the earth into long linear “swales,” which consist of a raised berm (to provide a well-drained planting location) and a broad, shallow ditch (to collect rainwater runoff and force it to percolate into the soil beneath the planting berm).

You will need to eliminate any weeds, grass, or other existing vegetation prior to planting. This can be done manually, or by smothering them under a “sheet mulch,” a permaculture tactic in which sheets of cardboard are overlaid with several inches of mulch on top of the vegetation, starving the plants for light and causing them to compost in place. Compost may be added as a layer between the cardboard and the mulch to add extra nutrients. Permaculturists often employ sheet mulching in conjunction with swales to enhance the area prior to planting.

When you’re ready to plant, simply brush aside the mulch and cut holes in the cardboard just big enough to dig a planting hole at the location of each plant. Then slide the mulch back around the newly installed plant. Maintaining a deep mulch is the key to preventing weeds, conserving soil moisture, and boosting organic matter—all things that will help your food forest be self-maintaining and self-sufficient.

The next step is to arrange your plants in the landscape. Position the tallest species (i.e. the ‘canopy’ plants) at the northern end of the planting area, with progressively smaller plants toward the southern end. This way the taller plants will cast less shade on the smaller ones, especially at the beginning and end of the growing season when the days are shorter and the sun hangs lower in the sky.

Of course, truly shade-tolerant plants may be interspersed throughout the understory of the forest garden. You might even consider cultivating mushrooms in the shadiest zones once the large trees have matured. Edible vines may be planted on any accessible fences, arbors, or walls, and you can also train vines up trees, just like Mother Nature does—just be sure the tree is significantly larger than the vine to avoid the tree getting smothered.

The edges of the food forest are suitable for sun-loving annual vegetables if you wish to include them. Also, keep in mind that it takes decades for a large tree to reach its mature size, so in the early years of a food forest, there is ample sunlight. Plant sun-loving species in the open spaces between trees and then replace them with more shade-tolerant plants as the forest matures.

HEIRLOOM SEEDS will make all the difference when you want to get a good start on your Food Forest. At THE SEED GUY, we have a great Heirloom Seed package that has 60 Heirloom Seed Varieties, 34,000 total Seeds, all Non-GMO. You get 49 Veggie varieties and 11 Herb Seed varieties. You would definitely be able to feed your family with this seed package, and you can store the seeds you don’t use right away in the 10 x 14 silver mylar bag we provide. All Heirloom Seeds are Small Farm-Grown, we hand count and package to make sure you get the best germination, and they are fresh from the New Harvest.

You can see Seed varieties and Order this Seed package on our website at: https://theseedguy.net/seed-packages/50-60-variety-heirloom-seed-package.html